Last night was truly memorable. And although It wasn’t technically a swarm catch, it was definitely an experience. The actual swarm had happened a few days earlier, and had found a home in an old abandoned schoolhouse building. We believe it was the old Hartell Schoolhouse, located a few kilometres North of Longview.

A local family had recently moved onto the property, and their house was only a few feet away from the old schoolhouse, so they were concerned about a whole nest of bees living in such close proximity to their home. So they called us to see if we’d be willing to try and remove the bees from their nest inside the wall.

After a bit of discussion, Josh decided to give it a try. The family agreed that it would be ok for Josh to remove a bit of the drywall inside the building to get at the bees. From the location of the hole on the outside of the schoolhouse, Josh hoped he’d be able to easily find their location inside the wall.

After a bit of Gyproc was removed, it was clear that the bees were exactly where we hoped they’d be. And what a lot of bees there were. A massive colony had stared a new home in the wall. 10,000+ bees make quite a loud buzzing noise, and were a bit annoyed at being removed from their nest. A bit of smoke calmed them a bit, and their removal, and relocation into a new hive box went surprisingly well. 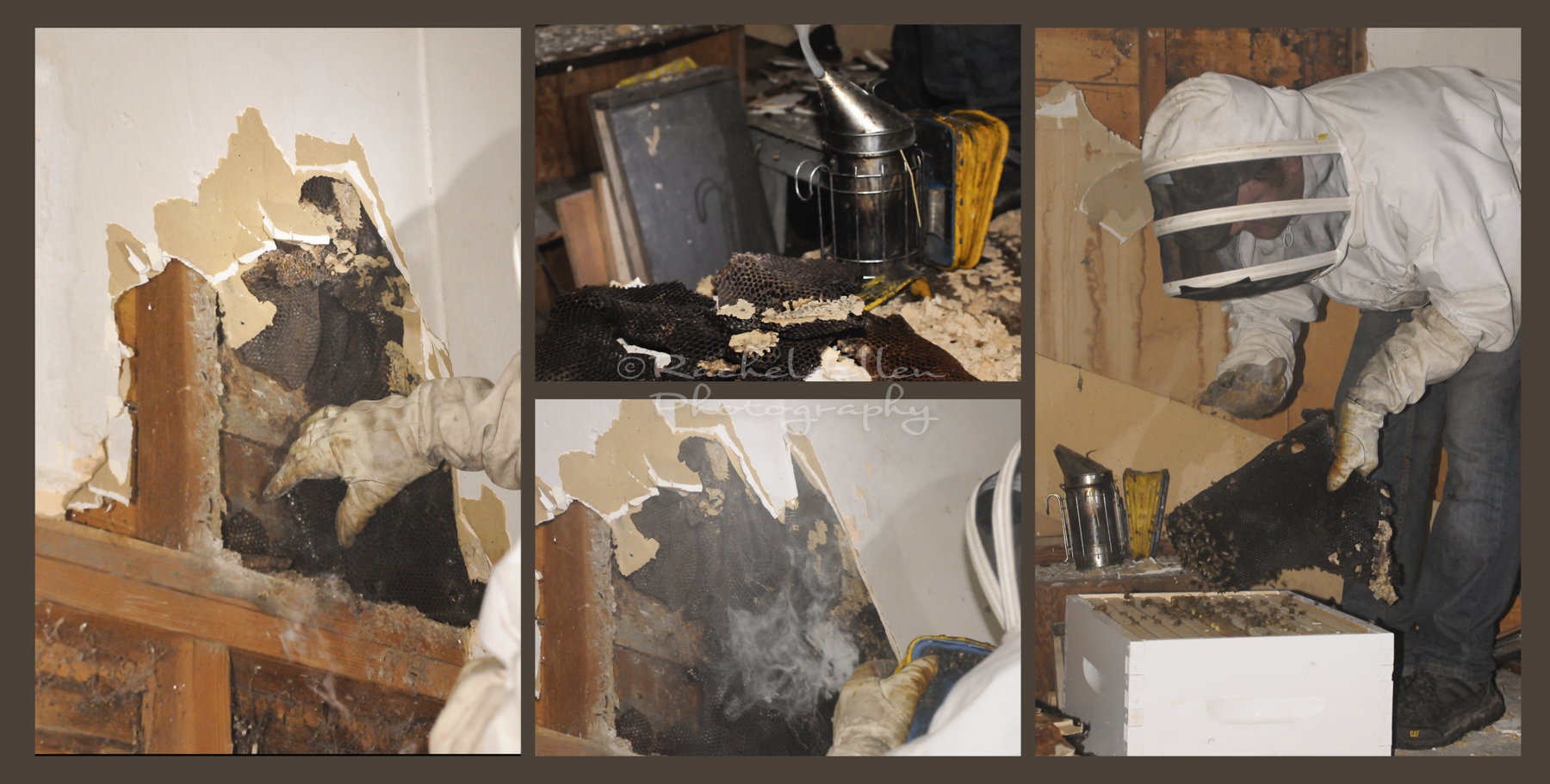 It became apparent that this location had been inhabited by a large colony of bees before. There was abundant old brood comb from several years before, but not much honey to speak of, indicating that this was a new swarm that had moved in.

At one point while Josh was very busy removing bees and comb, and had a large chunk full of bees in his hand, the ladder slipped, and he dropped a few feet to the ledge below. Luckily Josh wasn’t hurt, and the bees survived alright too.

A stray dustpan was a good find, to help remove the bees from the wall. Our new friends were very brave, and excited to take part in all the bee collecting action. I believe they each were stung once, but survived it quite well. Surprisingly, Josh and I were not stung at all. Josh thought the bees were behaving quite well, despite the ordeal. He thought they were likely tired from their recent swarm flight, and hadn’t had too much to eat in the past few days. 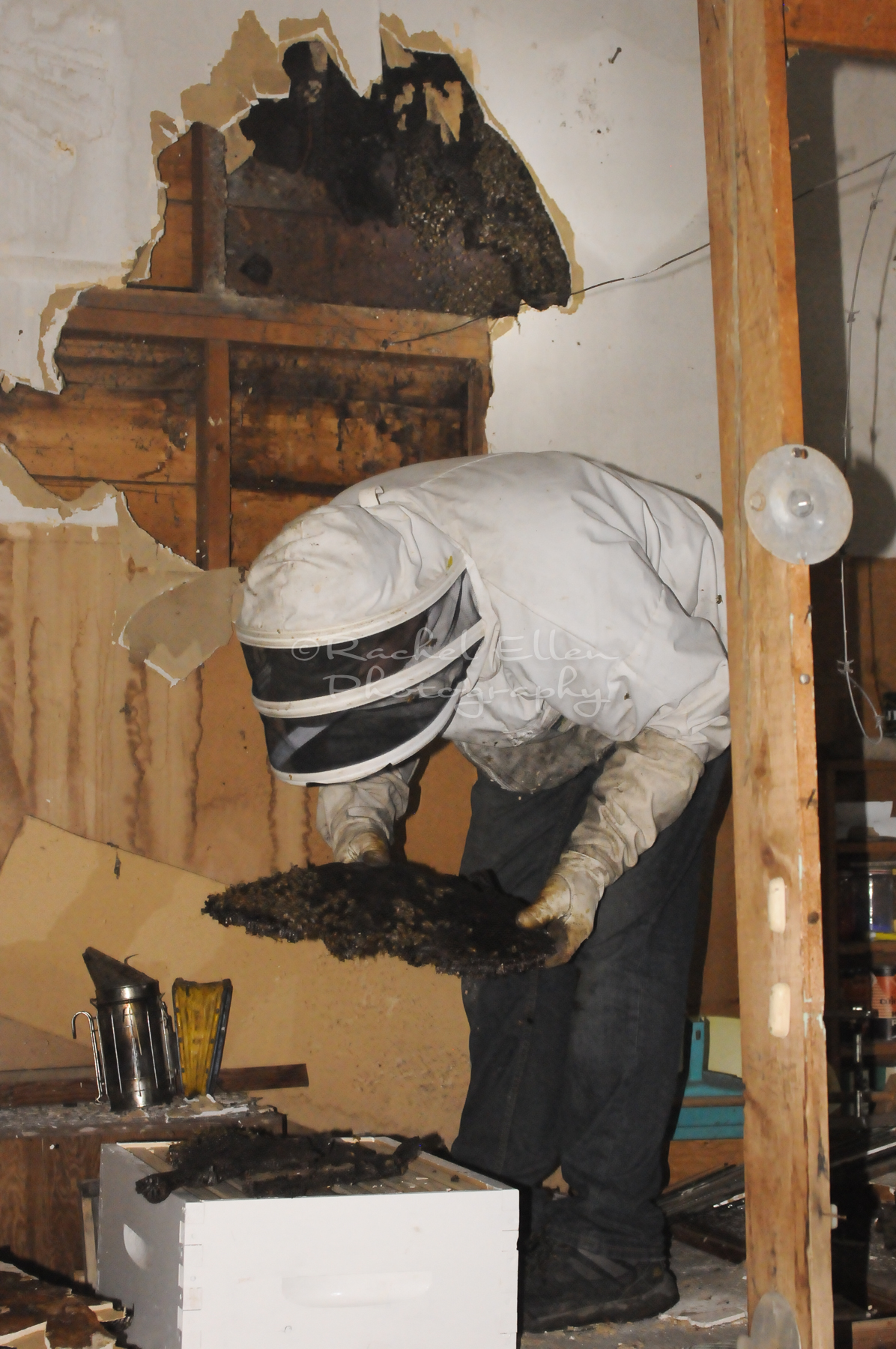 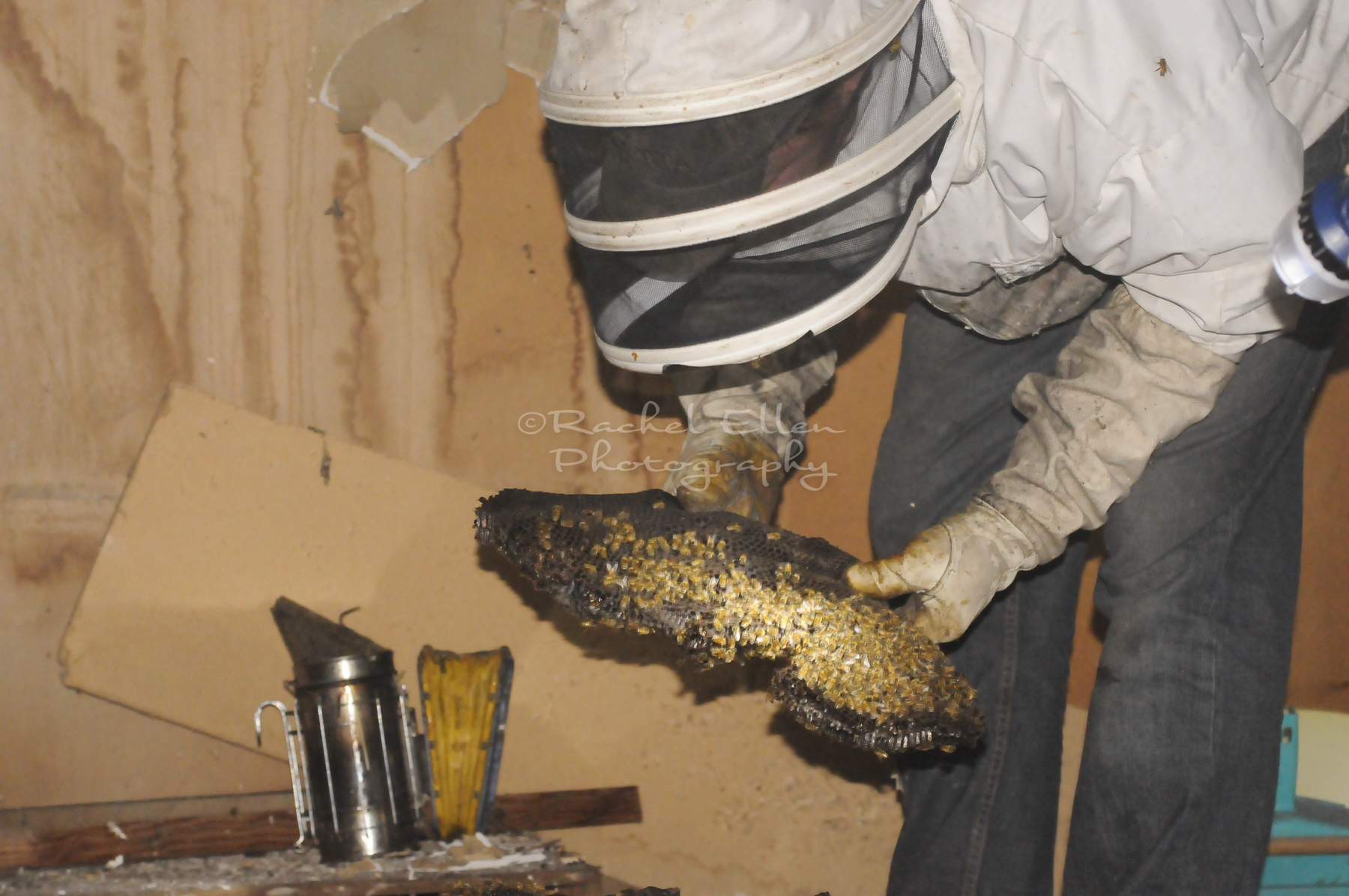 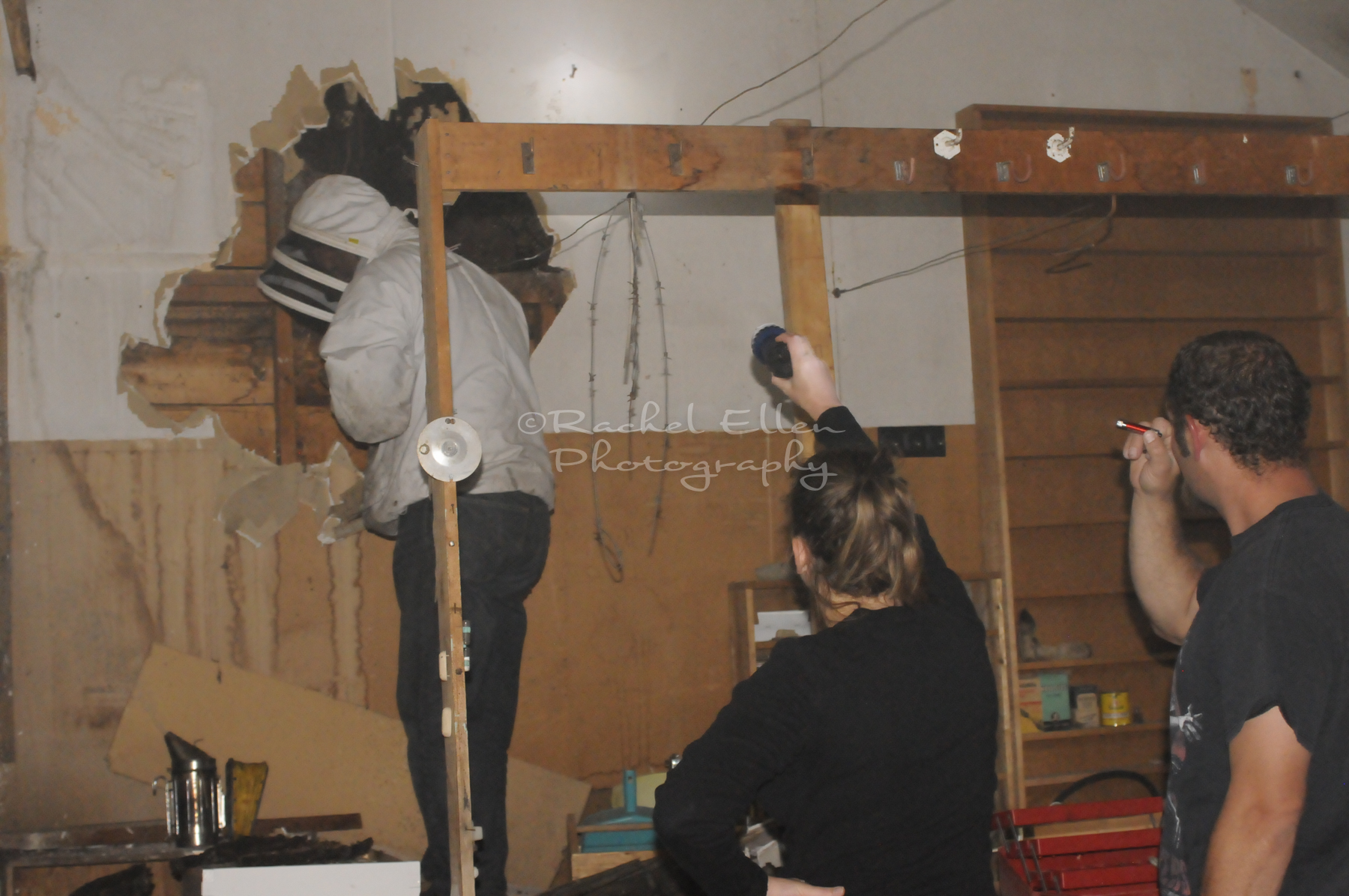 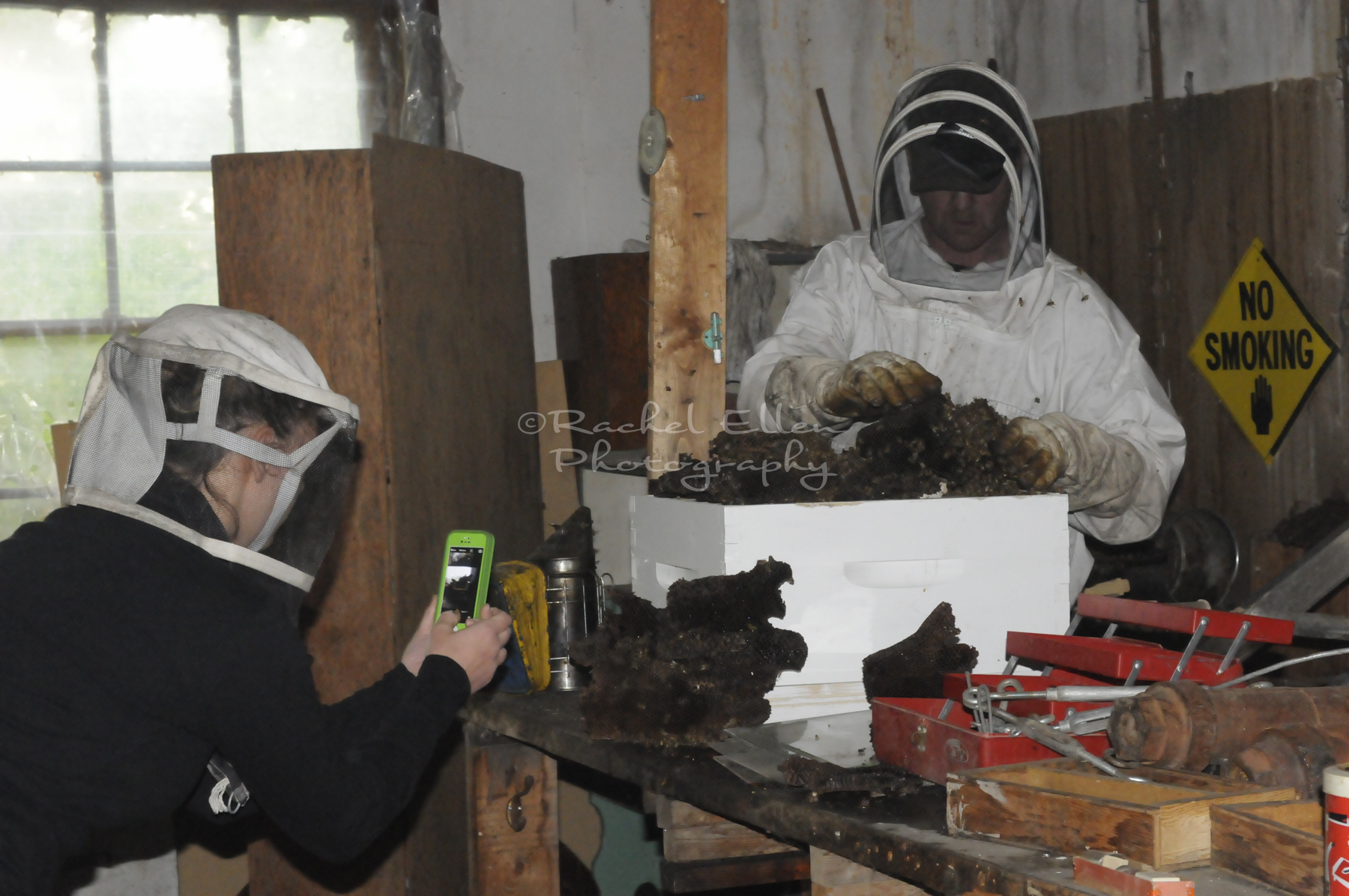 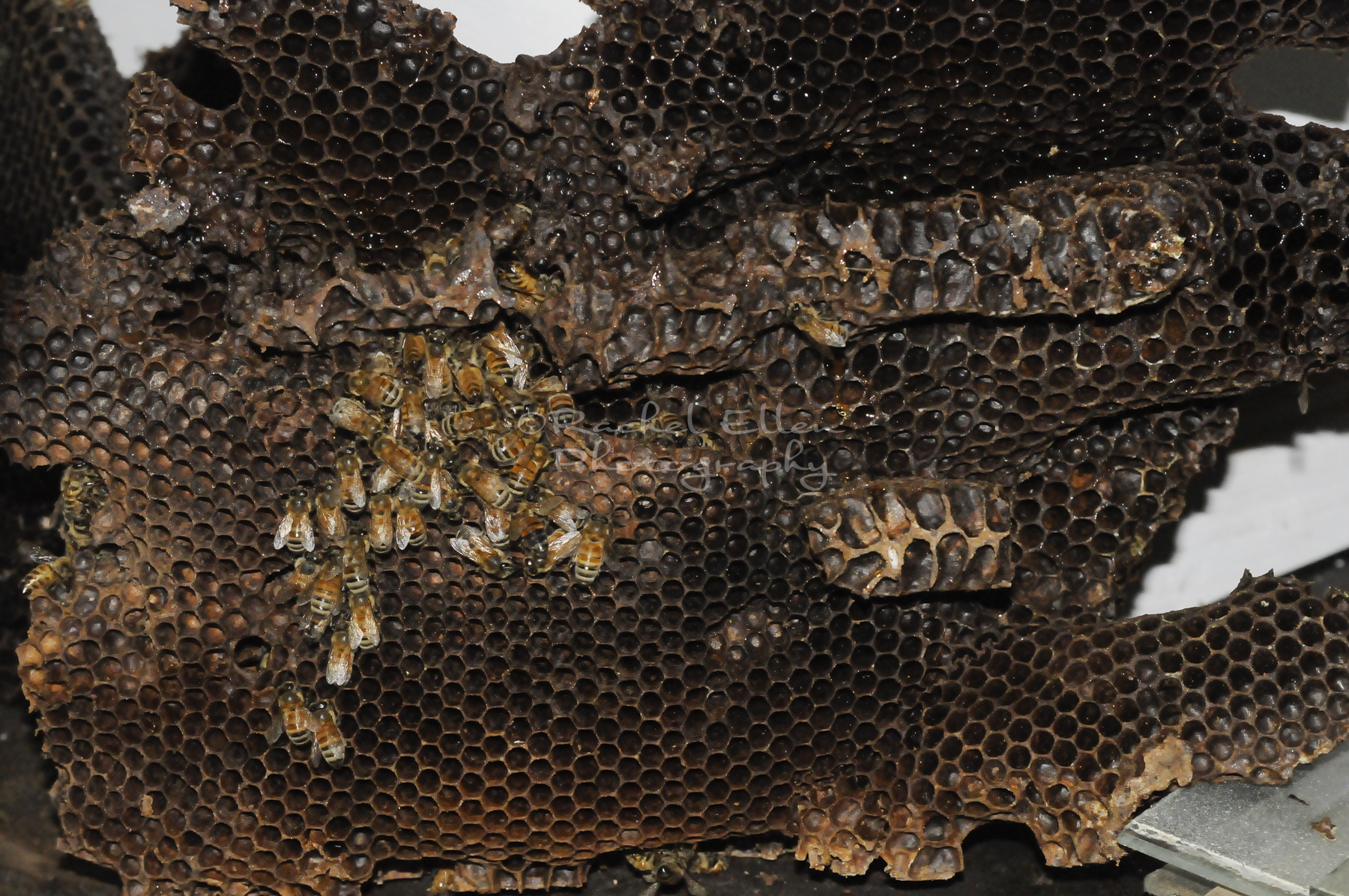 While we adults were busy collecting bees from the schoolhouse, our children made fast friends. Brodie and David were so excited to have two new playmates, and enjoyed exploring  around their home with them. The feeling was mutual. It was so much fun watching the children play together, as if they were old friends. It reminded me so much of my own childhood, when an impromptu outing became spontaneous, and enchanting, the fun of the evening feeling like it will go on forever. 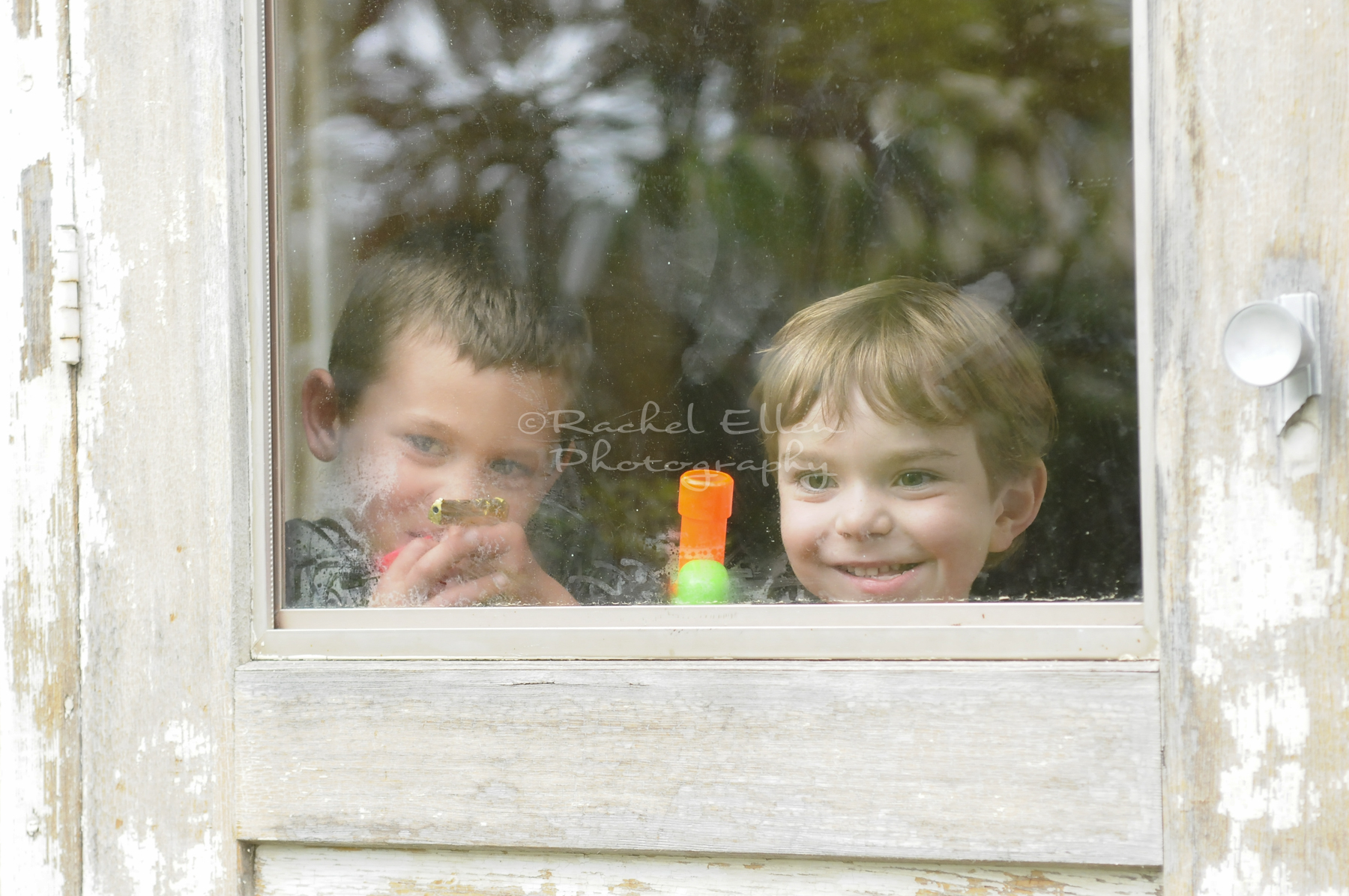 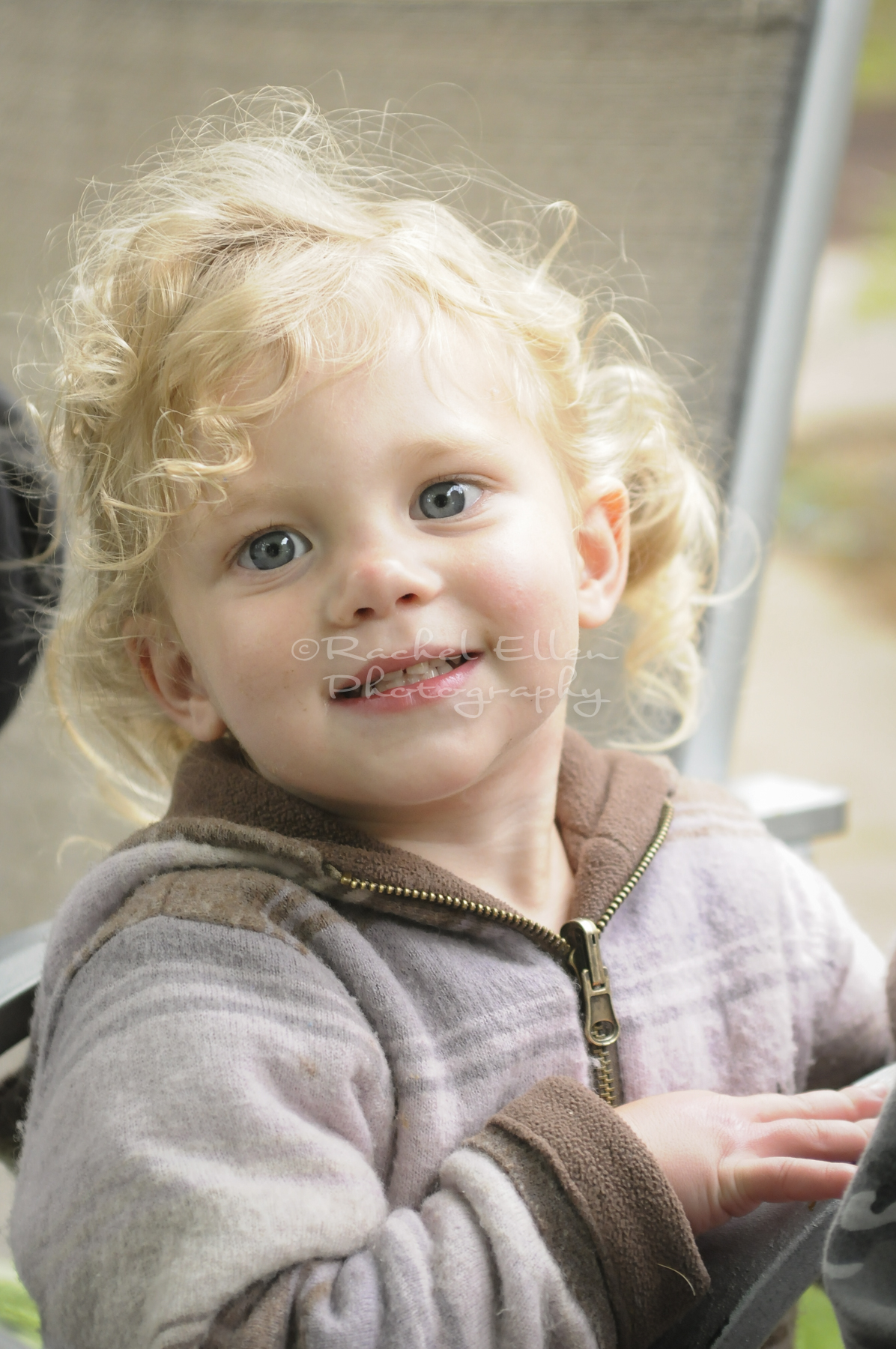 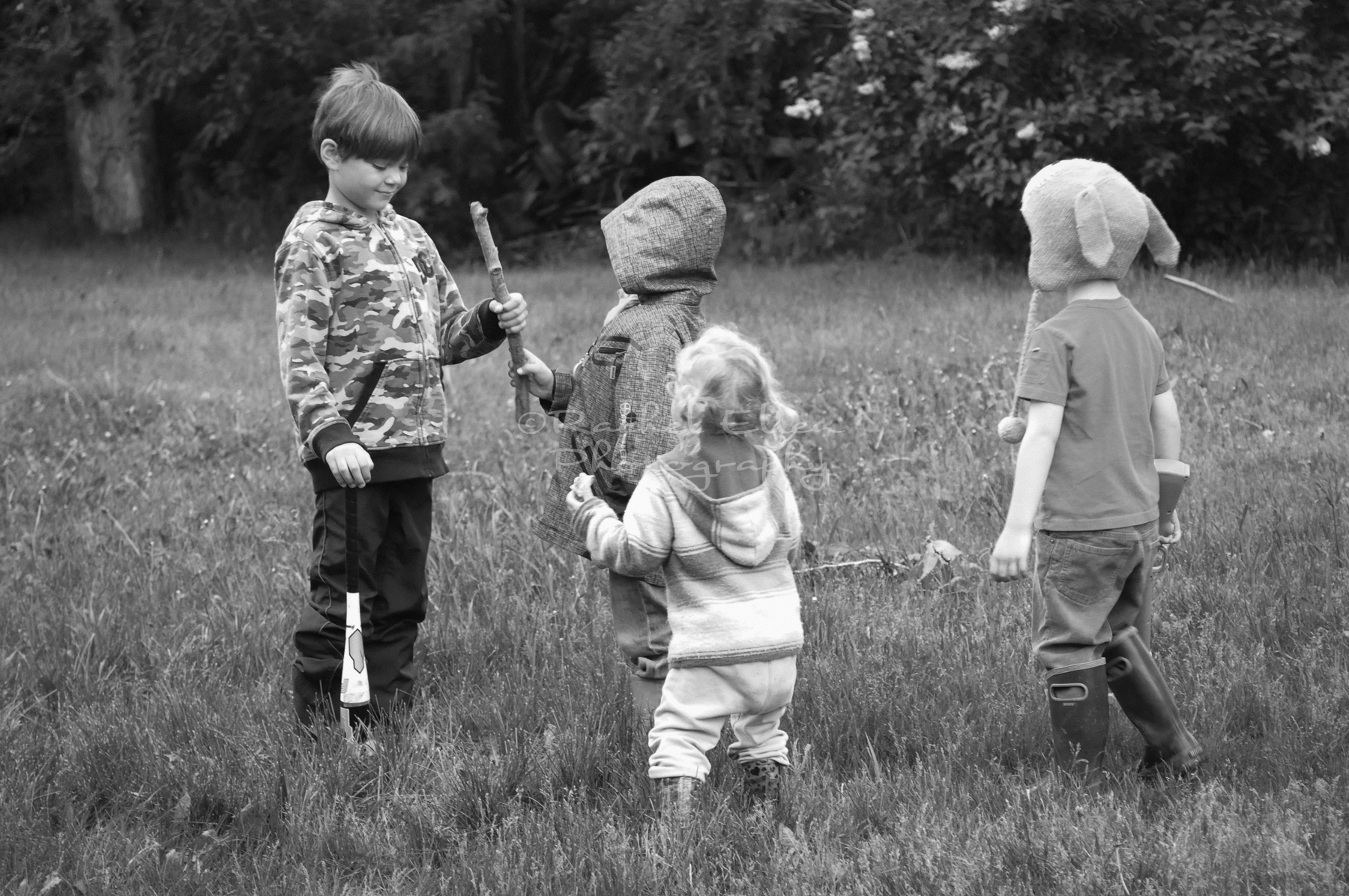 We let the bees settle down for a bit, as we all enjoyed a visit. It was a lovely evening.

After the bees had settled, Josh took them outside, so they would not try to go back into the wall. In the better light he searched for the queen. It didn’t take too long, before she was found. Wonderful news! We now get to add an entire hive worth of bees to our apiary. 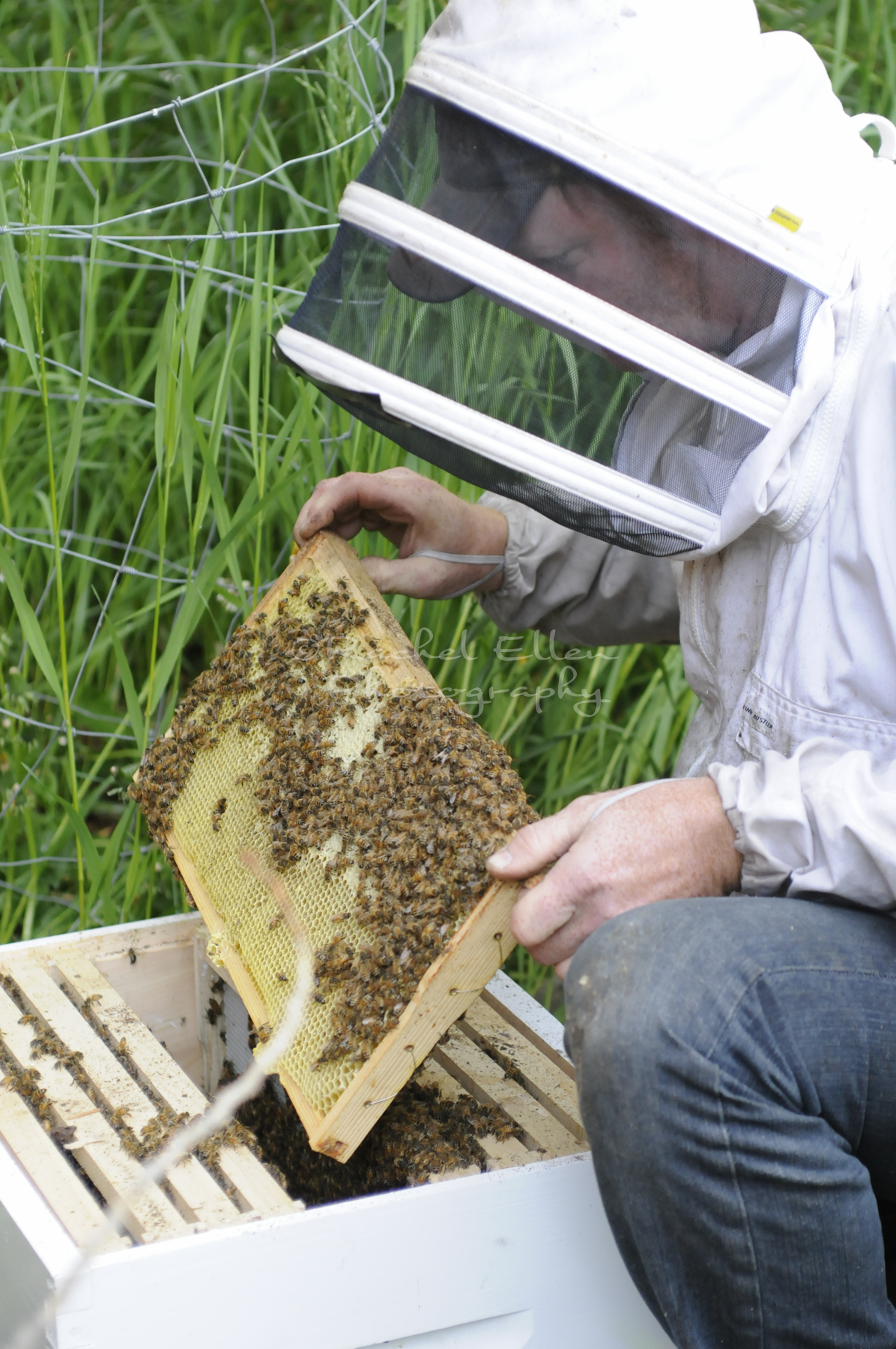